What is a Neuroma?

A neuroma is a thickening of nerve tissue that may develop in various parts of the body. The most common neuroma in the foot is a Morton's neuroma, which occurs at the base of the third and fourth toes. It is sometimes referred to as an intermetatarsal neuroma. "Intermetatarsal" describes its location - in the ball of the foot between the metatarsal bones (the bones extending from the toes to the midfoot). Neuromas may also occur in other locations in the foot.

The thickening, or enlargement, of the nerve that defines a neuroma is the result of compression and irritation of the nerve. This compression creates swelling of the nerve, eventually leading to permanent nerve damage.

Symptoms of a Morton's Neuroma 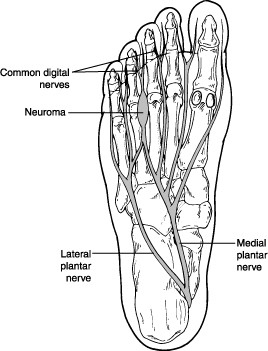 If you have a Morton''s neuroma, you will probably have one or more of these symptoms where the nerve damage in occurring:

A feeling that something is inside the ball of the foot, or that there's a rise in the shoe or a sock is bunched up.
The progression of a Morton's neuroma often follows this pattern:

The symptoms begin gradually. At first they occur only occasionally, when wearing narrow-toed shoes or performing certain aggravating activities.

The symptoms may go away temporarily by massaging the foot or by avoiding aggravating shoes or activities.

Over time the symptoms progressively worsen and may persist for several days or weeks.

The symptoms become more intense as the neuroma enlarges and the temporary changes in the nerve become permanent.

What Causes a Neuroma?

Anything that causes compression or irritation of the nerve can lead to the development of a neuroma. One of the most common offenders is wearing shoes that have a tapered toe box, or high-heeled shoes that cause the toes to be forced into the toe box.

People with certain foot deformities—bunions, hammertoes, flatfeet, or more flexible feet—are at higher risk for developing a neuroma. Other potential causes are activities that involve repetitive irritation to the ball of the foot, such as running or racquet sports. An injury or other type of trauma to the area may also lead to a neuroma.

To arrive at a diagnosis, a thorough history of your symptoms is obtained and the foot examined. During the physical examination, we will attempt to reproduce your symptoms by manipulating your foot. Other tests may be performed.

The best time to seek advice regarding your foot problem is early in the development of symptoms. Early diagnosis of a Morton's neuroma may lessen the need for more invasive treatments later.

Treatment approaches vary according to the severity of the problem.

For mild to moderate cases of neuroma, treatment options include:
When is Surgery Needed?

Surgery may be considered in patients who have not received adequate relief from other treatments. Generally, this will involve removal of the offending damaged section of nerve. If surgery is performed, the length of the recovery period will vary, depending upon the approach chosen

We are located at:

Get social with us.