Flatfoot is often a complex disorder, with diverse symptoms and varying degrees of deformity and disability. There are several types of flatfoot, all of which have one characteristic in common—partial or total collapse (loss) of the medial longitudinal arch associated with hyperpronation.

Other characteristics shared by most types of flatfoot include:

"Toe drift," where the toes and front part of the foot point outward.

The heel tilts toward the outside and the ankle appears to turn in.

A short Achilles tendon, which causes the heel to lift off the ground earlier when walking and may act as a deforming force.

Bunions and hammertoes may occur in some people with flatfeet.
Health problems such as rheumatoid arthritis or diabetes sometimes increase the risk of developing flatfoot. In addition, adults who are overweight frequently have flatfoot.

What is Paediatric Flatfoot? 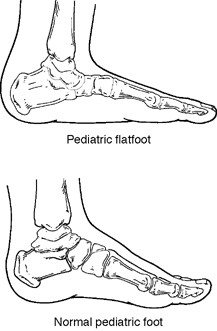 Flatfoot is common in both children and adults. When this deformity occurs in children, it is referred to as “paediatric flatfoot,” a term that actually includes several types of flatfoot. Although there are differences between the various forms of flatfoot, they all share one characteristic—partial or total collapse of the arch.

Most children with flatfoot have no symptoms, but some children have one or more symptoms. When symptoms do occur, they vary according to the type of flatfoot. Some signs and symptoms may include:

Pain, tenderness, or cramping in the foot, leg, and knee

Outward tilting of the heel
Flatfoot can be apparent at birth or it may not show up until years later, depending on the type of
flatfoot. Some forms of flatfoot occur in one foot only,
while others may affect both feet.

Symptomatic flatfoot is further described as being either flexible or rigid. “Flexible“ means that the foot is flat when standing (weight-bearing), but the arch returns when not standing. “Rigid” means the arch is always stiff and flat, whether standing on the foot or not.

Several types of flatfoot are categorized as rigid. The most common are:
There are other types of paediatric flatfoot, such as those caused by injury or some diseases.

In diagnosing flatfoot, the foot is examined and observed with the child standing and sitting. The surgeon also observes how the child walks and evaluates the range of motion of the foot. Because flatfoot is sometimes related to problems in the leg, the surgeon may also examine the knee and hip.

X-rays are often taken to determine the severity of the deformity. Sometimes an MRI study, CT scan, and blood tests are ordered.

If a child’s flatfoot is asymptomatic, traditional treatments have tended to avoid intervention with instead, the condition being observed and re-evaluated periodically. Custom orthotic devices may be considered for some cases of asymptomatic flatfoot however we now advocate use of the HyProCure sinus tarsi implant for both the asymptomatic and symptomatic flexible paediatric flatfoot.

In the symptomatic pediatric flatfoot, treatment is required and may include one or more approaches, depending on the child’s particular case.

Some examples of non-surgical options include:
Medications. Nonsteroidal anti-inflammatory drugs (NSAIDs), such as ibuprofen, may be recommended to help reduce pain and inflammation.

Shoe modifications. The foot and ankle surgeon will advise you on footwear characteristics that are important for the child with flatfoot.

When is Surgery Needed?

In some cases, surgery is necessary to relieve the symptoms and improve foot function. Foot and ankle sugeons perform a variety of techniques to treat the different types of pediatric flatfoot. The surgical procedure or combination of procedures selected for your child will depend on his or her particular type of flatfoot and degree of deformity.

Flexible flatfoot is one of the most common types of flatfoot. It typically begins in childhood or adolescence and continues into adulthood. It usually occurs in both feet and generally progresses in severity throughout the adult years. As the deformity worsens, the soft tissues (tendons and ligaments) of the arch may stretch or tear and can become inflamed.

The term "flexible" means that while the foot is flat when standing (weight-bearing), the arch returns when not standing. In the early stages of flexible flatfoot arthritis is not restricting motion of the arch and foot, but in the later stages arthritis may develop to such a point that the arch and foot become stiff.

Symptoms, which may occur in some persons with flexible flatfoot, include: 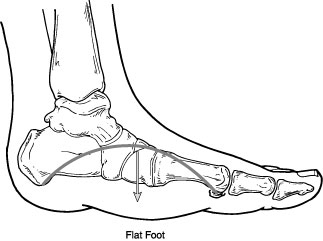 Pain in the heel, arch, ankle, or along the outside of the foot.

In diagnosing flatfoot, you feet will be examined whilst sitting and standing, X-rays are usually taken to determine the severity of the disorder

If you are diagnosed with flexible flatfoot, irrespective of whether you have symptoms, you will be advised of what you might expect in the future and various treatment options may be recommended, including:
Flatfoot Surgery

The procedure or combination of procedures that is used to correct flat foot deformity depends on many factors, including the cause and severity of the condition, as well as the patient's age, occupation and activity level. If surgery is performed, the length of the recovery period will vary, depending upon the procedure or procedures performed. 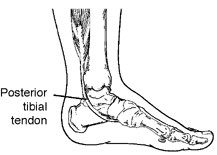 The posterior tibial tendon is a fibrous cord that extends from a muscle in the leg. It descends the leg and runs along the inside of the ankle, down the side of the foot, and into the arch. This tendon serves as one of the major supporting structures of the foot and helps the foot to function while walking.

PTTD is often called “adult-acquired flatfoot” because it is the most common type of flatfoot developed during adulthood. Although this condition typically occurs in only one foot, some people may develop it in both feet. PTTD is usually progressive, which means it will keep getting worse—especially if it isn’t treated early. 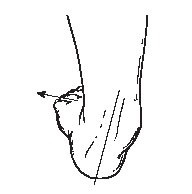 The symptoms of PTTD may include pain, swelling, a flattening of the arch, and an inward rolling of the ankle. As the condition progresses, the symptoms will change.

For example:
As PTTD becomes more advanced, the arch flattens even more and the pain often shifts to the outside of the foot, below the ankle. The tendon has deteriorated considerably and arthritis often develops in the foot. In more severe cases, arthritis may also develop in the ankle.

Overuse of the posterior tibial tendon is frequently the cause of PTTD which results from faulty function (biomechanics) associated with hyperpronation of the foot. In fact, the symptoms usually occur after activities that involve the tendon, such as running, walking, hiking, or climbing stairs.

Because of the progressive nature of PTTD, it is better to seek an opinion as soon as possible. If treated early enough, your symptoms may resolve without the need for surgery and progression of your condition can be arrested. In contrast, untreated PTTD could leave you with an extremely flat foot, painful arthritis in the foot and ankle, and increasing limitations on walking, running, or other activities.

In many cases of PTTD, treatment can begin with non-surgical approaches that may include:
When is Surgery Needed?
In cases of PTTD that have progressed substantially or have failed to improve with non-surgical treatment, surgery may be required. For some advanced cases, surgery may be the only option. Surgical treatment may include repairing the tendon, realigning the bones of the foot, or both. If surgery is performed, the length of the recovery period will vary, depending upon the procedure or procedures performed.

We are located at:

Get social with us.